We received an update on the progress of the Theodore Turley Papers project at our April 13th TTFO Temple and Family History Day. The first volume of the set will be based on Theodore Turley’s 1839-1840 missionary journal. Just as in the Joseph Smith Papers project, the book will include facsimiles of every journal entry along with a transcription more accurate than the many typewritten manuscripts distributed among Turley family members in the past.

The editors are hoping for this volume to come out at the end of the year (2019). Those who want copies will need to preorder them. We will let members of the Theodore Turley Family Organization know as soon as we get the ordering information. 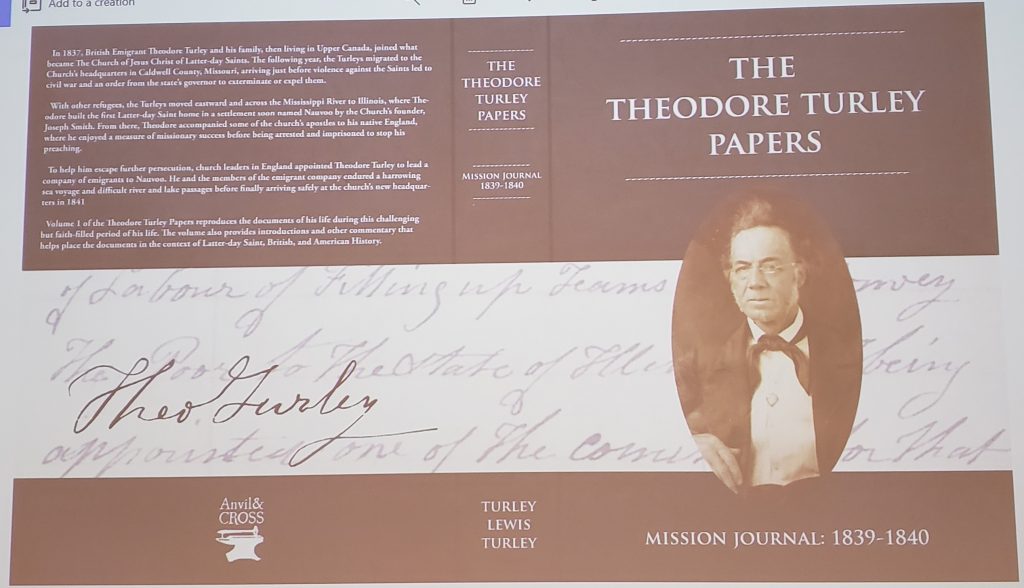 Text on back cover (draft):

In 1837, British Emigrant Theodore Turley and his family, then living in Upper Canada, joined what became The Church of Jesus Christ of Latter-day Saints. The following year, the Turleys migrated to the Church’s headquarters in Caldwell County, Missouri, arriving just before violence against the Saints led to civil war and an order from the state’s governor to exterminate or expel them.

With other refugees, the Turleys moved eastward and across the Mississippi River to Illinois, where Theodore built the first Latter-day Saint home in a settlement soon named Nauvoo by the Church’s founder, Joseph Smith. From there, Theodore accompanied some of the church’s apostles to his native England, where he enjoyed a measure of missionary success before being arrested and imprisoned to stop his preaching.

To help him escape further persecution, church leaders in England appointed Theodore Turley to lead a company of emigrants to Nauvoo. He and the members of the emigrant company endured a harrowing sea voyage and difficult river and lake passages before finally arriving safely at the church’s new headquarters in 1840.

Volume 1 of the Theodore Turley Papers reproduces the documents of his life during this challenging but faith-filled period of his life. The volume also provides introductions and other commentary that helps place the documents in the context of Latter-day Saint, British, and American History. 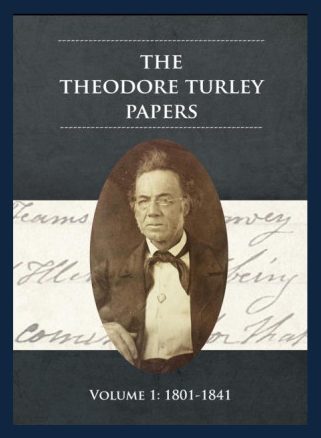 A priceless collection of facsimiles, transcriptions, and descriptions of documents related to the life of Theodore Turley will be published soon. The editors of this work are all descendants of Theodore Turley: Richard E. Turley, Jr., Ann Laemmlen Lewis, and David R. Turley II. The project is modeled after the Joseph Smith Papers publications by the Church History Department of The Church of Jesus Christ of Latter-day Saints.

(Note: this information is now outdated. Please see update above.) Each volume will be approximately 400-600 pages. The first volume will cover 1801-1841. This includes Theodore’s early years in England, residence in Canada and conversion to The Church of Jesus Christ of Latter-day Saints, ill-fated move to Missouri and subsequent evacuation, mission to England, and early years in Nauvoo.  The second volume will cover 1841-1871. Here we find his later years in Nauvoo, experiences and hearbreak in Winter Quarters, westward migration, colonization of San Bernardino, and final years in Utah.

In April 2017, one of the editors, David Turley, gave a preview to Turley descendants about the upcoming publication. You can view his PowerPoint slide presentation at Ann Lewis’ blog.

We will contact Theodore Turley Family Organization members as soon as these volumes are available to purchase.