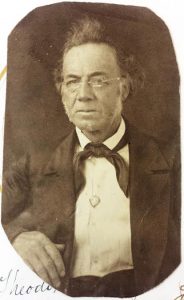 Theodore was the son of William Turley and Elizabeth Yates.

Theodore Turley was an early member of The Church of Jesus Christ of Latter-day Saints, a Mormon pioneer. He was born April 10, 1801, in Birmingham, England, a major center of the Industrial Revolution. Birmingham was known for its skilled and innovative metalworkers, and the skills Theodore learned there served both him and the Church throughout his life.

Theodore married fellow Birmingham native Frances Amelia Kimberley in November 26, 1821. After a falling out with a business partner in 1824, Theodore moved his young family to London briefly before immigrating to Canada.

Theodore and Frances initially settled in York (now Toronto), Ontario, and then moved in 1834 to the nearby village of Churchville. Theodore had long been interested in religion, and he was a Methodist circuit preacher there. He was introduced to The Church of Jesus Christ of Latter-day Saints by missionaries Parley P. Pratt and Isaac Russell and baptized on March 1, 1837.

In the summer of 1838, Theodore moved his growing family south to gather with the Saints in Far West, Missouri. Due to rising tensions, including the Missouri extermination order, the Saints were forced to leave in early 1839. Theodore was put on the committee to help evacuate and provide for those Church members without financial means. Because Theodore was one of the last Saints to leave the city, he had the opportunity to join with the Quorum of the Twelve Apostles at a special conference on April 26, 1839, at the Far West Temple site, a fulfillment of prophecy.

In June 1839, Theodore built the first Latter-day Saint home in Nauvoo, Illinois. Later that year, he left with several apostles on a mission to his native England, and led the first group of 200 British converts back to Nauvoo in 1840. In the following years, Theodore participated in the early Latter-day Saint practice of polygamy, taking on three sisters as plural wives: Mary Clift, Eliza Clift, and Sarah Ellen Clift Selwyn. Theodore served as a captain, a lieutenant colonel, and the armorer-general in the Nauvoo Legion. Theodore was also a member of the Council of Fifty.

Joseph Smith died in 1844, and the Saints were forced to leave their homes again in early 1846. Theodore took his family west and settled for a time in Winter Quarters, Nebraska. (One of his plural wives, Eliza Clift, chose to remain in eastern Iowa with her baby daughter.) While in Nebraska, Theodore lost many family members to disease, including two of his wives: Frances Amelia Kimberley and Sarah Ellen Clift.

In 1849, Theodore took his remaining family members to Utah with the Silas Richards Company. He lived for a time in Salt Lake City, where his only remaining wife, Mary Clift, died after giving birth. He then married his fifth and final wife, Ruth Jane Giles on June 18, 1850.

In 1851, Theodore took his family to help build a Mormon colony in San Bernardino, California. He served in several leadership positions during his time there, including school commissioner, city treasurer, and president of the San Bernardino high council. In 1857, Church leaders called the San Bernardino Saints back to Utah.

The remainder of Theodore’s life was spent in southern Utah. He spent most of 1858 living in Cedar City, Utah, working with the Deseret Iron Mission until it closed. Afterwards, he lived in Washington, Utah, where he operated a gristmill in addition to his blacksmithing. In early 1860 he sold his land and mill to John D. Lee, moving with his adult children to the new settlement of Minersville, Utah. Several years later, he moved for the last time to the nearby town of Beaver, Utah.

In the last two years of Theodore’s life, he and his more prominent son-in-law, apostle Amasa M. Lyman, became involved with the Godbeite movement. This group, fueled primarily by British converts, embraced spiritualism and was critical of Brigham Young’s economic policies. Because of that participation, Theodore was excommunicated on June 14, 1870, for apostasy.

Theodore Turley passed away on August 18, 1871 at his home in Beaver, Utah. The cause of death was cancer of the throat and mouth.