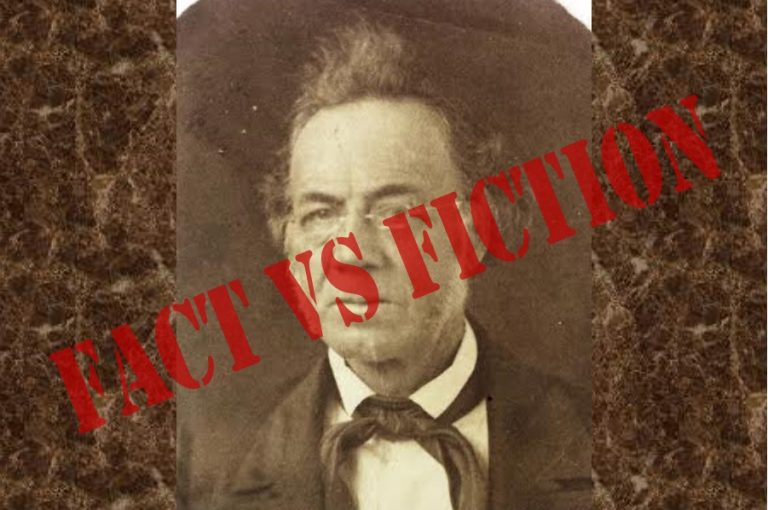 FALSE: Theodore Turley had his own Methodist congregation.

Richard E. Turley, Jr.: “I hear family members all the time talk about Theodore having a church, because he was a Methodist preacher. Please throw that idea away! Theodore was a lay Methodist preacher, which meant he had a day job. And he did this on the side in the same way that Latter-day Saints have a day job and serve as bishops on the side. Theodore did not have a church per se. Methodism tended to be a circuit riding kind of frontier faith where the preachers moved from place to place and preached in different locations. So Theodore never had a church. We have no evidence that he ever had a church.” (From 2017 TTFO Temple and Family History Day Presentation and reported in March 2018 TTFO Newsletter. Transcription by Mary Ann Clements.)

FALSE: Theodore Turley made dies for English coins and was friends with the king of England. He received a land patent in Canada and cattle from the king when his partnership went bust.

TRUE: Theodore had a partnership in England that went bust.

Richard E. Turley, Jr.: “The red book containing the biography that was done by Ella Mae, who was a wonderful person. I knew her, spent long hours chatting with her. And the work that she did on that history was a pioneering work, one that she started when she was a secretary in the Religion Department at BYU and collected a lot of information. So she pulled together a lot of wonderful information, but some of it’s wrong. She had an interview with, that she cited, an interview that had been done with Ernest Turley, a grandson. And in there he claimed that Theodore and his business partner had a contract to create dies to stamp English coins, and that partway through the process his partner ran off with the money, leaving Theodore with the bills. Then, according to Ernest, Theodore was a friend to the king, and the king took a liking to him, and gave him the option of moving to Canada and set him up with basically some land and a blooded herd of cattle.

“How many of you heard that story before? That’s simply not true, okay. It is not true.

“David [Turley] and I, and Ann [Lewis], have done a lot of research into Theodore’s business pursuits. He did have a stamping and piercing business in England. He was apprenticed to a master stamper and piercer, he learned that trade. So basically he could make dies to stamp coins. And I’ve been in Nauvoo and, with the Community of Christ people, have looked through the artifacts that were dug up on Theodore Turley’s property and there’s a piece of metal showing round circles punched out of it. I don’t know if they were buttons or coins or what he was making at the time, but clearly he continued to have that expertise.

“Well, when he got to [Canada] we can trace his property ownership, and he does not go to a farm or ranch when he gets there, as you would suspect if he had a land patent from the king. We’ve done land research. He has no land patents from the king. So that idea is just simply not true. He also doesn’t appear to have a blooded herd of cattle, okay. The first thing he does when he gets to York, which is the early name for Toronto, the first thing he does when he gets there is he sets up a business, and we have his business advertisements in the newspaper so we know exactly what type of business he was pursuing. Initially he had, Theodore Turley, ‘late from London,’ had this business of doing anything with metal. So he would do blacksmithing, whitesmithing, he would sharpen hooks, he would sharpen spears for fisherman, and so on. He had a long list of things that he would do in the way of metal work. That was his first business. Then over time, as an entrepreneur, he starts to add other aspects to his business. He learns about pumps, and he learns about brass foundries, and he adds these elements to his business for a time.

“And his shop was right downtown in Toronto. Ann and I walked to the location while we were there. Now it’s in the middle of all these skyscrapers that go up. It would be the equivalent of, basically, Main Street and South Temple today. In Toronto, okay, it was right down the heart of York, which was then just a tiny, tiny little city. And he worked as this metal worker for years, and then finally he got enough capital in hand that he purchased some property in the Churchville area. And we can track his property ownership. We’ve got the property records. Ann and I visited locations there. There were other records I got back in the 70s and 80s at the Family History Library. We can track his property ownership. We’ve mapped it all out. We can show when he bought and sold pieces.

“So please get rid of the idea that he was friends with the king. Highly unlikely story that someone in his social class would even possibly know the king. In the early 1980s I got a research grant as a student at BYU and sent a researcher to England who came back having investigated that story. He said, ‘You know, I asked around and they said that making coins was monopoly of the crown, and there’s no way they would have jobbed that out to somebody like Theodore Turley.’ So please, please do not repeat that story about Theodore being a friend of the king.

“Now that being said, we’ve learned something very interesting about Theodore. He apparently did have a business partner with whom he had a problem, William Lin[don]. And we’ve—David and I and Ann have found lots of newspaper articles in which Theodore, both in Birmingham and in London, announces to the world that he is willing to resolve all debts relating to their partnership. So we can show through the newspapers when the partnership was dissolved, and we show Theodore honorably, not trying to escape the debts, but honorably trying to pay those debts off while he is an England. So I think that is proof of the integrity of our ancestor, that despite the fact he had some kind of problem with his business partner, he advertised in Birmingham and London to pay off any debt that his business may have owed to anyone. I think that’s, in many ways, an even better story than the one about the blooded herd of cattle and friend of the King.” (From 2017 TTFO Temple and Family History Day Presentation and reported in March 2018 TTFO Newsletter. Transcription by Mary Ann Clements.) 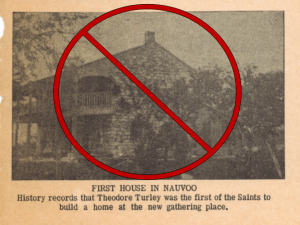 Richard E. Turley, Jr.: “A lot of family members find old Nauvoo newspapers with old photographs in them that say, ‘This is a picture of the Theodore Turley home.’ None of those homes that are shown in early Nauvoo newspapers were Theodore’s. These were homes that already existed at the time the Saints arrived there, and so people thought, ‘Well, these were the first homes, must’ve belonged to Theodore Turley.’ Not true.

“The best image we have of Theodore Turley’s home is in this [print of a painting] that David has brought. This is an image that you can buy at the Church History Museum. We acquired this [painting] when I was over the Church History Museum. We acquired this watercolor some years ago. This is General Joseph Smith Addressing the Nauvoo Legion, so this is near the end of Joseph Smith’s life.

“This stand that [Joseph Smith is] on is right across from the Mansion House [at left]… Theodore Turley’s property is right here [behind the Mansion House], and if you look carefully you can see right near the street here a structure and then there seems to be something else behind it—a chimney that goes up. The archaeology that’s been done on this property shows multiple structures there, and there’s even something back here which may or may not be on his property. It’s a little bit difficult to tell. But this is the best image we have of what Theodore Turley’s structures looked like. We don’t know which one was business, which one was—because on that same property he had a brewery, he had his home, he may have had two homes, actually. We think the first one that he built is the one that those of us who went to Nauvoo saw. It’s not fully aligned with the street. We think that was his first home because when he built his home the streets were not fully laid out yet. They would have built it however he though best, and then when the streets were laid out it turned that the home was a little skiwampus to the street. Then I think he built another home south of that. …

“So this is a painting that was done by a church member at the time when this would have been visible. So this is the best picture of Theodore Turley’s house. Now go to the Church History Museum and get yourself a copy like David has.” (From 2017 TTFO Temple and Family History Day Presentation and reported in March 2018 TTFO Newsletter. Transcription by Mary Ann Clements.)

For more information on Theodore’s Nauvoo home, see the October 1999 newsletter article, “11: The First House Built by a Saint in Nauvoo, 11 June to 18 July 1839” written by Richard E. Turley, Jr.

FALSE: Theodore Turley was present with Edwin Rushton when the White Horse Prophecy was given by Joseph Smith.

TTFO Admin: Current research suggests the document known as the “White Horse Prophecy” was a fabrication made by Edwin Rushton around 1900. Theodore Turley was long dead by then. The Church of Jesus Christ of Latter-day Saints has repudiated the document since 1918. The most recent comment by the Church was in 2010: “The so-called ‘White Horse Prophecy’ is based on accounts that have not been substantiated by historical research and is not embraced as Church doctrine.” For more information, including images of the first known written copies of the prophecy, check out the 2010 BYU Studies article by Don Penrod, “Edwin Rushton as the Source of the White Horse Prophecy.”