The seas remained calm on Tuesday morning, September 22, 1840, as Theodore Turley and the Latter-day Saints emigrants aboard the North America sailed toward their promised land, the United States. But in the late
morning, the calm was broken by a desperate cry.

“About 11 o clock,” wrote Theodore’s assistant William Clayton, “I heard the chief mate cry out all hands on deck and buckets with water.”

Some of the Mormon women had been sitting near their berths between decks when they saw flickers of light. At first they thought they were sparkling reflections of sunlight through a window. Then sparks of fire began to drop through the deck above them into the steerage area. “The ship is on fire!” They screamed.1

The chief mate heard their screams and thus “sang out” as William Clayton described.

Packet ships like the North America were made primarily of wood, and the danger of the craft catching fire was real, especially since cooking and heating were done with wood stoves.

The cry of all hands on deck to fight the fire “caused considerable alarm and bustle for sometime,” Clayton wrote. “The sailors w[ere] speedily at work and water was poured on for sometime.”

The fire was quickly assessed, contained, and extinguished. Once the crew got the upper hand, Clayton could report, perhaps with a touch of bravery, that there really was “not much danger.” But the details he recorded suggested otherwise:

The fire originated in the galley or cooking house. The wood underneath the stove had caught fire by some means and burned through the deck. After the fire was put out the Captain ordered the stove removed and the place examined. It was cleaned out and repaired and some improvements made. Some of the saints smelled fire last night and told the mate but he could not discover any thing wrong. We look upon this circumstance as another attempt of the adversary to destroy us but the Lord kindly preserved us.2

The Saints also felt grateful that the fire occurred while the winds were calm. A sailing vessel needs wind to reach its destination, and both passengers and crew might at times dread the doldrums as much as storms.

Sickness and death among their numbers cast a pall on the emigrants. The same night as the fire, Clayton wrote, “we had the painful task of casting overboard [the] Mormon son of Paul and Jane Harris.” The child was one of three who had been sick for several days. “He was thought to be dead sometime before and preparation was made to bury him. He died about 8 o clock.”

Sickness afflicted other members of the Latter-day Saint emigrating company. The dead boy’s mother was very sick at the same time he was. Several other Saints were also stricken.

Latter-day Saint casualties tended to be higher than those among other British emigrants, probably because more children and elderly passengers emigrated among the Saints. The Mormon passengers sought to exercise their faith against the power of the destroyer.

“We attend to prayer every evening,” Clayton wrote, “as well as our awkward circumstances will permit.”3 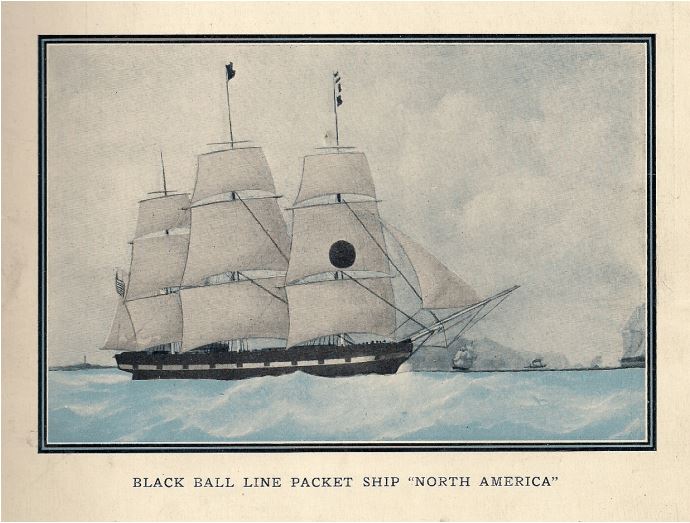 The North America, from the cover of the Antiquarian, June 1927