Although a small number of homes already existed in the vicinity when the Turleys arrived, Theodore wrote that he “Built the First house that was built by a Mormon in Nauvoo.”1 One of the homes that was already standing at the time the Saints arrived in the area was a stone house built in the 1820s by Captain James White and his family and later occupied by Isaac Galland and Church leader Sidney Rigdon.2 In 1935, the Deseret News published a photograph, a copy of which is reprinted below, that mistakenly identified the White house as the home built by Theodore Turley3: 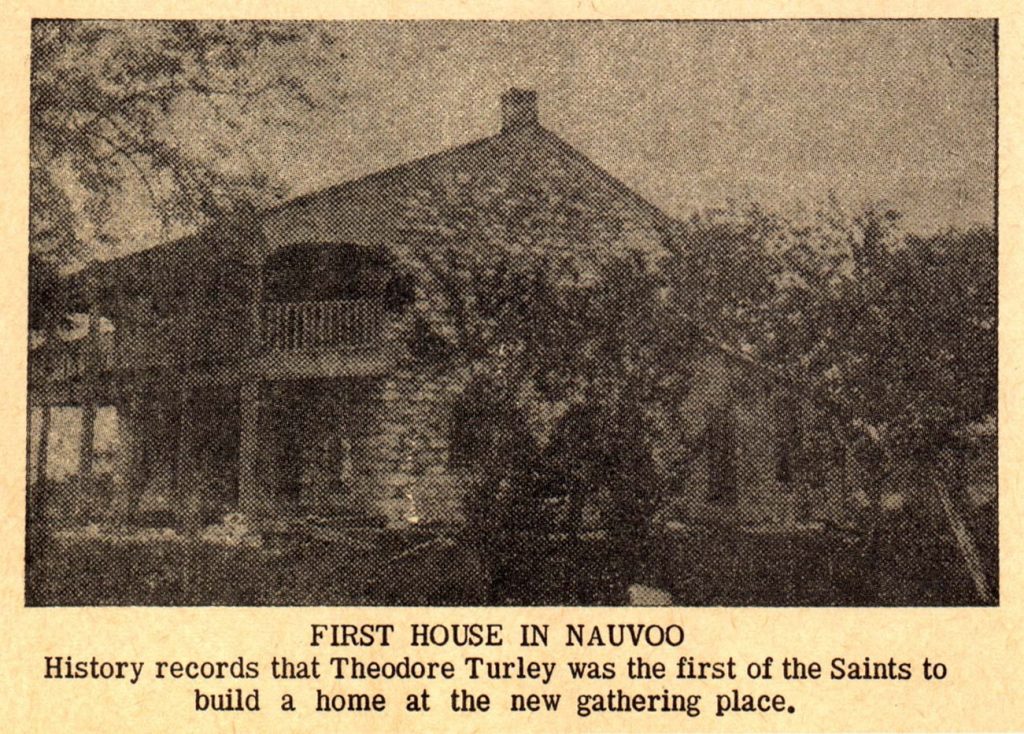 A photograph that appeared in the Keokuk, Iowa, Daily Gate City in 1961 suggests another candidate: 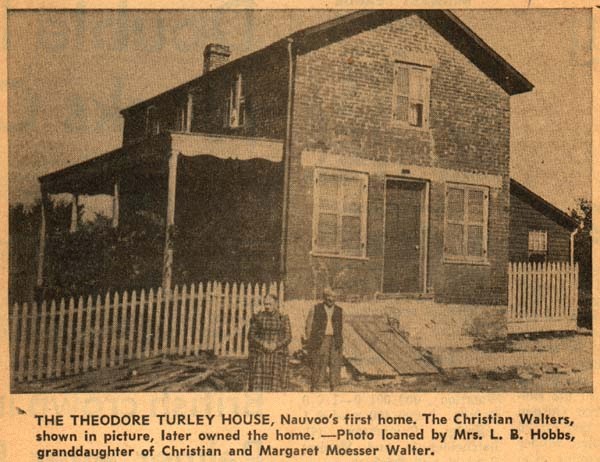 The photograph shows a two-story home with a pillared porch, a chimney on the left side of the house, and a lean-to on the back. According to the caption published along with the photograph, the home was originally Theodore Turley’s and was later owned by Christian Walters, who appears in the picture.5 The house was reportedly razed in 1934.6

A photograph taken from across the Mississippi River by G. F. Gouty around 1900 gives some credence to the Walters house’s claim to being Theodore’s.7 The photograph shows a two-story home with a pillared porch, a chimney on the left side, and a lean-to on the back. The home is situated northeast of the Nauvoo House on the southeast corner of the block on which Joseph Smith’s Mansion House was located. Thus, it is situated on property that land records prove Theodore Turley once owned. The portion of the Gouty photograph that includes the home is shown below with an arrow pointing toward the house in question. 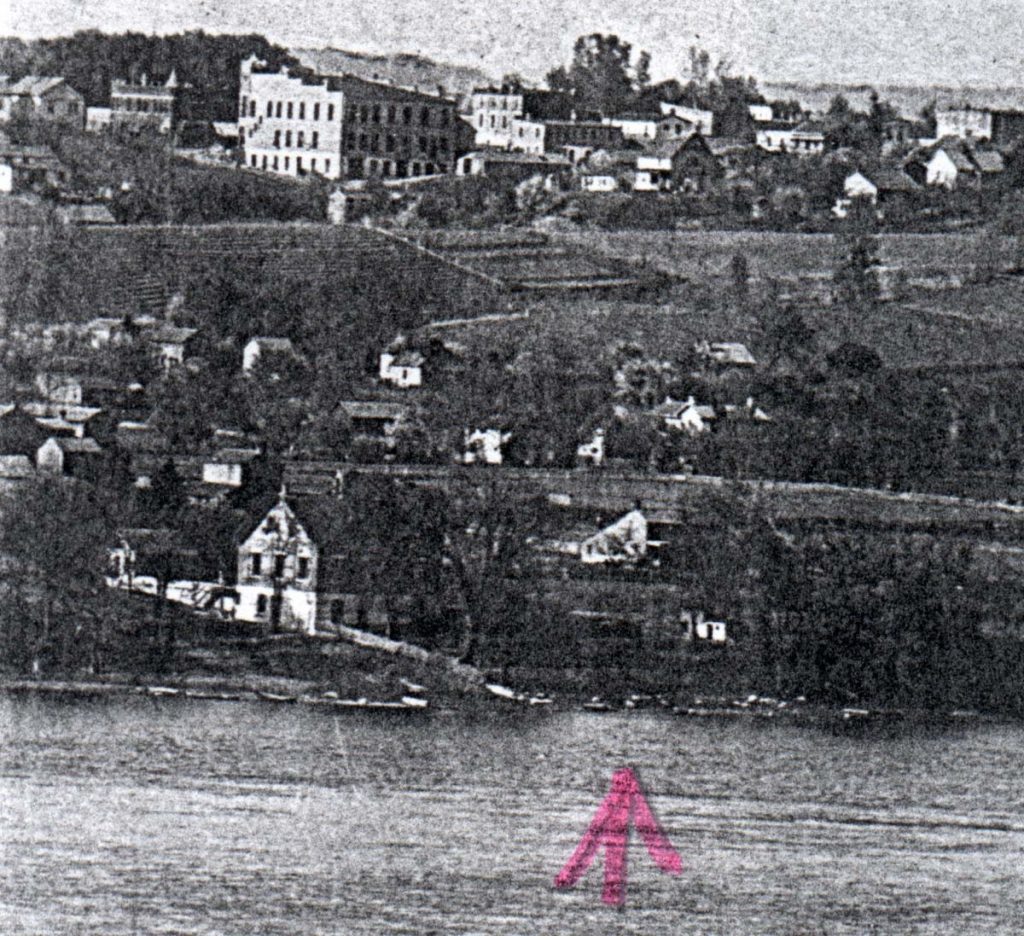 This home, however, had apparently undergone substantial remodeling from the time that Theodore Turley lived in Nauvoo. Proof of the change comes from a pen-and-ink drawing of Water Street made around 1845 by Robert Campbel8:

As this drawing shows, the home on the corner was originally a single level log home with a loft. The nature of the home becomes more apparent when the image is magnified: 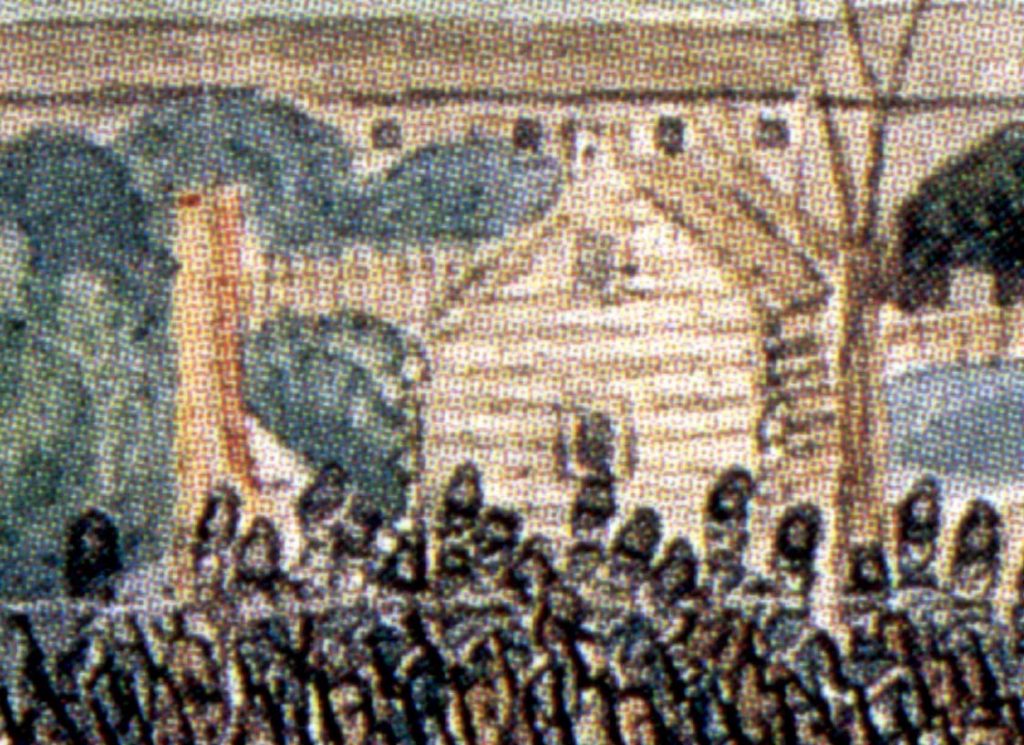 At first, this 1845 drawing—made at the time Theodore and his family were living in Nauvoo—would seem to put to rest all speculation about the nature and appearance of the first Latter-day Saint home built in Nauvoo, the one built by Theodore Turley. But there is a major problem: the structure in the picture apparently is not the house Theodore built when he first reached the Nauvoo area. Rather, it seems to be a structure he built later.

Advertisements in the local newspaper, the Nauvoo Neighbor, suggest that this building on the corner of Hyde and Water Streets was actually constructed by Theodore as a business building about four years after he and his family moved into the area.9 As to the first home Theodore built in Nauvoo, the published History of the Church under date of 11 May 1839 includes the following language: “About this time Elder Theodore Turley raised the first house built by the Saints in this place [Commerce]; it was built of logs, about twenty-five or thirty rods north north-east of my dwelling, on the north-east corner of lot 4, block 147, of the White purchase.”10

This description suggests that the first home was built not on the southeast corner of the lot, like the business building, but rather on the northeast corner of it. This conclusion seems to be supported by an archaeological study conducted on the property by archaeologists from the University of Missouri at Columbia in 1973.11

To date, no photographs of the original cabin have been located, and it seems likely that it was converted into an outbuilding or taken down not many years after it was originally built. An 1859 map of Hancock County, Illinois, clearly shows the business building on the corner of the block but has no indication of the earlier cabin further north.12

The best description of the nature of the original home comes from Theodore’s own pen, which described the materials he gathered for its construction: “Logs [and] Stone.”13 We also know how long it took him to build it. He left Far West on 18 April and from that day, according to his account, “for The Space of Thirteen wekes” his family “neavour ha[d] the Privelidge of Sleeping under a ruff.”14 Thirteen weeks from 18 April would put the date they moved into the house at 18 July. Coincidentally, his missionary convert and good friend James Mulholland recorded in his own journal that on Thursday, 18 July 1839, he “moved to Brother [Theodore] Turleys.”15

With his house now built, Theodore could finally focus his attention on the mission to which he had been called, a subject that would occupy his mind for more than two years.