Happy 4th of July! Here’s a fun tidbit from a 1931 issue of The San Bernardino Sun newspaper.1 Did you know that Theodore Turley was one of the first residents of San Bernardino county to ever submit naturalization papers for United States citizenship, way back in 1855? 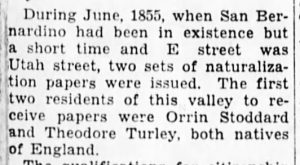 Theodore was born and raised in Birmingham, England, and immigrated to Canada sometime in late 1826 or early 1827. He and his wife, Frances, were baptized into the Church of Jesus Christ of Latter-day Saints in 1837, and a year later they decided to gather with fellow Saints in the United States. By the time Theodore obtained his citizenship in 1855, he’d been a resident of at least five different states or territories in the USA: Missouri (Far West), Illinois (Nauvoo), Nebraska (Winter Quarters), Utah (Salt Lake City), and California (San Bernardino).

Theodore and his family members were among the Latter-day Saint pioneers who established a colony in San Bernardino under the leadership of apostles Charles C. Rich and Amasa M. Lyman in 1851. As Theodore’s 1855 citizenship change attests, those in the San Bernardino Colony were looking forward to finally having a permanent home, but increasing tensions convinced Church leaders to call the Saints back to Utah only a few years later. Learn more about Theodore’s time in San Bernardino in the April 2019 presentation by David Roche Turley II. 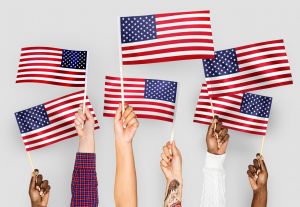